One of the books I'm reading at the moment is about the French Impressionists. It's very good, but it doesn't have many images of the paintings in it, so this morning I hunted out some little books about the Impressionists that I've had since I was a teenager. 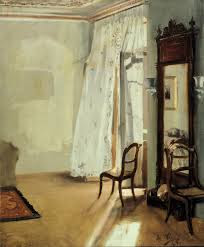 In one of them, I came across this picture. It's called The Balcony Room, and it's by a German painter called Adolf Menzel. It was painted in the second half of the 1840s, so before the French paintings with which we are more familiar.

I've always remembered it, though I had no idea till today where I'd first seen it. I'm not sure what it is about it that was so fascinating; perhaps it's that it's empty of people - there's a sense that someone has just left: perhaps that enables you to fill the space from your own imagination. Or maybe it's the light, the simplicity, the spaciousness of the room. Whtever it is, I still find it evocative.