Watching the inauguration of Joe Biden yesterday, I was hugely impressed by the young poet, Amanda Gorman. Wasn't she amazing? If you didn't see her, I'll put a link at the bottom of the post.

Inspired by her, I thought we'd have a look at poetry this week. In discussion, several of you have said that you're unsure about how to write poetry that doesn't have an obvious, regular rhyme scheme. And Simon Armitage, the Poet Laureate, has been mentioned - so I thought I'd look for an example by him. This was actually written about thirty years ago - I don't have anything very recent. Have a look at it, and think about the form as well as the meaning. I think it's probably true to say that poetry is a short piece of language which has a pattern: so what's the pattern here? Probably a good idea to read it aloud.

It would be interesting to do the same with Amanda Gorman's piece - it certainly had patterns - but I haven't seen the text yet. The task follows the poem.

This winter, six white geese have settled near the house.

This morning as she polishes the furniture

and peers across the river to their nesting place

she finds the gaggle floating off downstream, and there

instead is one white egg sat upright in the sand.

The geese, distracted with a crust, are unaware

as Rose, her eldest, in ankle socks and sandals

cradles the egg in the lap of her pinafore

and picks a safe way back across the stepping stones.

She cracks the contents on a bed of cornflour

and paints policemen on the empty halves of shell

to sell as plant-pot-men in next month's flower show.

Later, the six white geese will crane their necks to smell

the fine egg-pudding cooling on the window-sill.

Write a poem of your own, in 'free' verse. It can be on any subject you like, but here are some starters:

This week, I want you to write about the first time you - or your character - did something. Jot down some possibilities first - eg:

First time you bought a dress your mum disapproved of

These are a few examples, but really, the list is endless! Can be a story or a memoir.

(This exercise is taken from 'Free-Range Writing', by Jenny Alexander.) 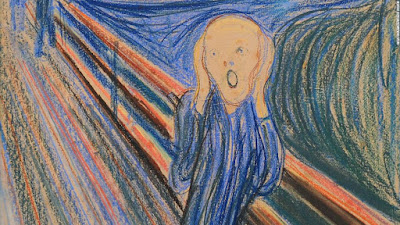 Someone is rocked by a difficult emotion. What is it? For example, jealousy, anger, boredom, fear.
Why are they feeling this way? What caused it?
Take a moment to imagine you are feeling this emotion. Notice the physical effects - where do you feel it in your body?
Stories are always about a protagonist who wants something. Your protagonist wants to stop feeling this way. what needs to happen in order for them to feel better? How can they make that happen?
Write the story of how they try to change their situation, ending in either success or failure. What do they learn? How does the journey change them?
Fiction tip: when you are writing stories, as well as the action of the plot, think about the psychological journey of the protagonist. How are they changed by what has happened?
(Non-fiction alternative
Write about a time when you've felt a difficult emotion. What was the context? How did you feel? What happened? How was the situation resolved?
If this feels a bit gloomy or negative, you could write about a time when you/your character felt happy, elated, hugely relieved. But it might be harder to make it into a story! SP)
at January 08, 2021 No comments:

I think it's time for a bit of fantasy travelling, a bit of escapism - so let's go!

Below are three postcards. You can use one of these as a starting point for a story or imaginative piece of some kind - or you can use a picture of your own and simply write about the place.

You might want to start by describing what you see, but it's entirely up to you!

A poem in winter

Just in case anyone has spotted the word 'poem' and has a bad case of sinking heart, panic not! As far as I'm concerned, a poem is just a short piece of writing, arranged in short lines, with a certain pattern to the rhythm. It can have rhyme, but that's not essential.

There! That's not so bad, is it? Of course, like everything else, as you get further in, it can get more complicated, with talk of sonnets and sestinas and suchlike, but that's the basis of it: a short piece of writing on a theme of your choice. 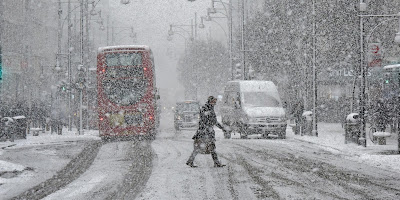 And our theme this week is 'Winter'. This gives you huge scope, and as ever, I'd suggest a spider chart - jot down all the different aspects and thoughts and feelings that come to mind. You might be drawn to writing about nature, or about a memory, or about winter food or clothes, or about weather, or the sea in winter, or how new growth begins in the garden - the possibilities are endless.

Here are a couple to get you into the zone. First, a very beautiful one by Christina Rosetti, which you will recognise. The second is a contemorary poem by Kathleen Jamie.

In the Bleak Mid-winter

In the bleak mid-winter

Snow had fallen, snow on snow

In the bleak mid-winter

It was winter, near freezing,
I'd walked through a forest of firs
when I saw issue out of the waterfall
a solitary bird.

It lit on a damp rock,
and, as water swept stupidly on,
wrung from its own throat
supple, undammable song.

It isn't mine to give.
I can't coax this bird to my hand
that knows the depth of the river
yet sings of it on land.
*******
If you find it difficult to get started, try an acrostic. You think of a title - eg 'Midwinter's Day'. Then you write the title down the left-hand side of the page, and write a line for each letter. Eg:
My favourite bit of winter
Is that first fall of snow.
Down float the flakes, soft and certain,
While children watch... etc etc 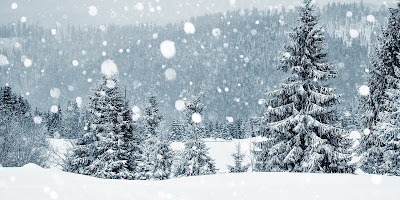 I was going to present you with some images of Christmas as a starting point for writing - but when I googled Christmas, none of the images that came up really seemed to represent Christmas for me. Though I did like this one!)

So I decided instead to look for some writing that I hope will inspire you. First, here's a poem by U A Fanthorpe.

This was the moment when Before

Turned into After, and the future's

This was the moment when nothing

Sprawled boringly over the earth.

This was the moment when even energetic Romans

Could find nothing better to do

Than counting heads in remote provinces.

And this was the moment

When a few farm workers and three

Members of an obscure Persian sect

Into the kingdom of heaven.

And in a very different mood, this comes from The Country Child, by Alison Uttley. This book is about a year in the life of a little girl living on a Derbyshire farm at the end of the 19th century. There's a whole chapter on Christmas, full of the most delicious things, but this bit is from the beginning.

Susan awoke in the dark of Christmas morning. A weight lay on her feet, and she moved her toes up and down. She sat up and rubbed her eyes. It was Christmas Day. She stretched out her hands and found the knobby little stocking, which she brought into bed with her and clasped tightly in her arms as she fell asleep again.

She awoke later and lay holding her happiness, enjoying the moment. The light was dim, but the heavy mass of the chest of drawers stood out against the pale walls, all blue like the snow shadows outside. She drew her curtains and looked out at the starry sky. She listened for the bells of the sleigh, but no sound came through the stillness except the screech-owl's call.

Again she hadn't caught Santa Claus. Of course she knew he wasn't real, but also she knew he was. It was the same with everything. People said things were not alive, but you knew in your heart they were: statues which would catch you if you turned your back were made of stone; Santa Claus was your father and mother; the stuffed fox died long ago.*

*(The stuffed fox was something she saw on her way to bed every night, which she was afraid of.)

Some suggestions for getting started:

Get a biggish piece of plain paper and make a spider chart - put down, without thinking too much, all the ideas, memories and things you associate with Chistmas. Circle the ones that stand out.

Email ThisBlogThis!Share to TwitterShare to FacebookShare to Pinterest
Labels: Christmas, The Country Child

Pick an object - any object!

We’ve done this before, but I don’t think that matters! 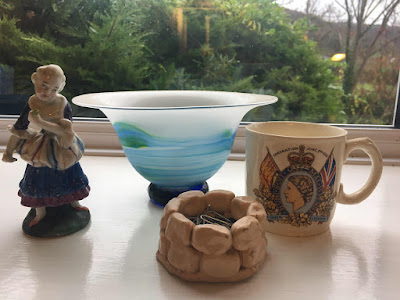 I’ve picked these four objects pretty much at random. From left to right, they are a porcelain figure of a girl in, I suppose, 18th century costume (she’s actually one of a pair), a glass bowl, which came from Cornwall and reminds me of the sea, a small pottery receptacle made by one of my children at school, and a Coronation mug.
You are very welcome to use one of these, or (probably better) choose something of your own.
Start by carefully describing the object you’ve chosen - not in a sentence, but really thoroughly.
Then it’s up to you which way you take it. You can either use it as a prompt for memories and reflections, or you can put it into a story. If you go for a story, remember it needs to focus on a point where something changes in the life of the protagonist - and it would make sense for the object to be bound up in this.
Good luck!
at November 19, 2020 No comments: