Your prompt this week comes from a friend of mine, Linda Strachan, writer of a recently published and immensely useful guide to writing children's books, which you can see here. Linda says she didn't actually make this up, and has no idea who did - so if the author is out there, please get in touch and I'll credit you!

The starting point is an object - you can either do it about an object you have , or you can make the whole thing up and turn it into a story - up to you!

Important - do read the whole thing through before you start!

The headings give you a structure, and underneath the headings are some suggestions.


1 Choose an object. Describe it in detail but in the first person - picture it in your mind and make it personal.
Eg I like it because it feels smooth and I like to run my fingers over it...

2 Where did you find it, or how do you came to have it?

Eg I was standing at the side of the road…

My grandmother gave it to me for my...

3 Why is it important to you?

Eg I keep it close all the time because…

4 Say something that bothers you or worries you about it.

Eg I am terrified I will lose it and..

I am scared someone will see me with it…

5 Make a decision about it

Eg I’ve made up my mind to throw it away…

I’m going to give it to a charity because…

I’m never going to be free of it but…


BUT - never name the object!


Some objects other people have used:

Did you guess? It was a pebble.

Email ThisBlogThis!Share to TwitterShare to FacebookShare to Pinterest
Labels: Creative writing in the time of the virus, Linda Strachan

This week, our way into writing is going to be via our emotions

Think back to times when you felt very happy. Make notes on three of these times. Then decide on one which you will write about at greater length. Think about how you can get across the feeling; doesn't just have to be you, the narrator, telling us: show us, maybe through what you do, how you behave, what you wear - even through what the weather was like! (Fancy term alert coming up: when a writer makes the weather mirror the mood of the main character, it's called the pathetic fallacy.) 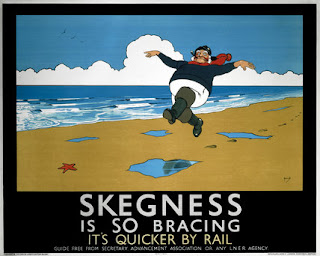 The piece can be memoir or, as ever, for those who prefer to write fiction, it can be a story.

Then, if you have time, it would be an interesting exercise to choose a very different emotion - sadness, say, or anger, or spite - and do the same with that.

I've been looking at a couple of online courses recently. All of a sudden, there are a lot of them about - like this one, I suppose, and there for similar reasons. There's always something useful to be gleaned from them, and the idea that's stuck in my mind from one of them is this: that every story involves the main character taking on a QUEST, with lots of obstacles along the way which have to be overcome.

There's nothing new in this idea. There are lots of books which set out the archetypes which form the basis of all stories, and one of them these is always the 'hero's journey'.


This course suggested you can simplify it even further - that every story is about a character who must undertake a quest. I haven't tested it out thoroughly yet, but so far, every book I've thought of fits: Harry Potter has to find out more about his parents and save the world from Voldemort; the Bennet sisters have to find husbands; the Count in A Gentleman in Moscow has to survive his confinement within the walls of a hotel and even make a positive out of it: Heidi has to melt the heart of the Alm Uncle.

So if you want to write a story, as opposed to a character sketch, that's what you need. A quest: a struggle against almost insurmountable odds. When I've been into schools talking about writing, I often get four children out at the front and line them up. I tell them that the first child is the hero/heroine, tootling along quite happily. The second one is something bad that happens - an obstacle. The hero/heroine manages to overcome this, and the reader breathes a sigh of relief. But then - WHAM! Along comes an even tougher obstacle (I usually get someone naughty to play this, and pull faces and scowl and things) - which is going to be even harder for the hero/heroine to overcome. But s/he manages it in the end.

Then the fourth person is the hero/heroine at the end. But as you see - s/he has changed. S/he's different, because all s/he's gone through has changed her/him.


So, options for this week.

1. Use one of these beginnings to start off a story:

I met my father for the first time when I was seventeen. It didn't go quite as I'd imagined...

Or: She went out into the garden, touching a flower here and there as if for reassurance. She sat down, in her favourite seat overlooking the pond, and took some deep breaths.
So. It had happened, as she'd always known it would. Now what?

2. Make up a character (see earlier post here), and send them on a quest of some kind. It might be to find something that's lost, to look for something new, to conquer a long-standing fear - whatever you like.

3. Those who don't want to write a story - take us on another walk, or tell us about another holiday.

Finally - I was just reading an interview with Jackie Morris, who is the illustrator of The Lost Words and many other gorgeous books - and also a writer. In it, she says that Michael Morpurgo once told her that Ted Hughes had told him, that if you want to be a writer, you should each evening write down three observations about something you've seen, thought, come across, during the day. It need only be a sentence. But it trains you to observe, and it will also eventually be a sort of treasure box you can dip into. I'm going to try it, and maybe you would like to as well.
at May 15, 2020 No comments:

'Are we nearly there yet?'

Yes, in the words of the great Cliff Richard in a song from his seminal film Summer Holiday: 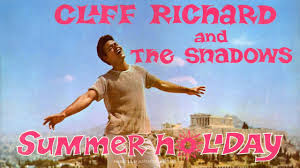 Except, of course, we're not. Thanks to you-know-what. But fear not - all is not lost...

Because now is the time for a virtual holiday!

Think back to a favourite holiday. Either write about it directly, or use it as a springboard for a story. But please - really take us there! I want to know what it looked like, what it smelt like, what it tasted like, what it sounded like. Villages of white buildings climbing up a Spanish mountainside? Tick. Buckets and spades on Weston beach? Tick. Mountain ranges in Outer Mongolia? Absolutely tick. 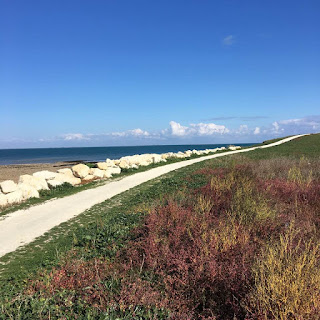 I'll look forward as ever to reading the Cheddar group's pieces. But other visitors to the page: why not pause for a minute or two, and write down a lovely memory in just a sentence or two in the comments? There could even be a prize in it for the most evocative description!

Good luck, and may the best holiday win!