Haiku is a Japanese form of poetry which dates back over a thousand years. I imagine (probably quite wrongly) the ladies and gentlemen of the court, in their embridered silken robes, drifting out of the palace into gardens filled with cherry blossom, lingering on bridges above ponds filled with golden carp, lifting their heads as a cool breeze reminds them of the distant, snow-capped mountains...

Well, it's not quite like that here. But it is a time where many of us have unexpected amounts of leisure to stop, and gaze, and think. And haiku is the perfect way to encapsulate such moments, and such thoughts, in a few words.

Japanese is a very different language from English, and so English haiku is naturally going to differ from the original form. I don't know any Japanese, so I don't know how great the difference is. But this is my understanding of the form.

A haiku is very short. It has three lines, and traditionally the first and last line have five syllables each, and the middle line has a heady seven syllables. It doesn't rhyme.

It focuses on a moment in time. Because of this, transience, a sense of time passing, of the cycle of life, is often a theme. Often it will start with an observation of something observed through the senses - something seen, heard, smelled, touched or felt. This may be followed by a reflection: the experience examined. Short as it is, it can be very profound: whether it's that or not, it certainly captures a moment in time in a very direct way.

Haikus don't take very long to write, but like any creative activity, they require you to focus very intently on what you're doing. And while you're doing that, you aren't doing other things - like worrying, for instance. So they're ideal for the time of the virus.

And they're good too because they make us notice things; they help us to engage with the world outside ourselves - particularly with the natural world.

Here are a couple I did a while ago. I volunteer on the SS Great Britain, Isambard Kingdom Brunel's beautiful, groundbreaking ship. It's been brilliantly restored, and you can go to see it in Bristol.


One day last winter, as the afternoon drew to a close and the shadows lengthened, I was on the ship, below deck. Hardly anyone was about. At this time, the ship's past feels very close. I thought about all the people who had travelled on the ship for two months at a time, who'd lived, laughed, fought, given birth, fallen ill, died there.This is what I wrote.

And this one, about the ship herself:

She cleaves the water
Not mistress of the sea, but
An uneasy guest.

Over the next few weeks, I'm going to have a go at writing some about the time of the virus. Will post in the comments. If you write one and would like to share it, you could do the same!

View from a window

Well, last week's challenge, concerning an object, brought in some wonderful work from the Cheddar Writers. (That's not their official name. They started off as the Write Class, then they morphed into Riverside Writers (see here for a recent anthology of their work), because for several years we met at a very hospitable pub in Cheddar called the Riverside. The room we had there became a bit too small for us, so we recently moved to Cheddar Baptist Church, which has a lovely big airy room. Where, of course, we can't meet at the moment...)

We were all fascinated to read about a bohemian artist relative called Joy, who lived and continued to work well into her nineties and lived in a wonderful house in Salisbury by the river. The object was a diamond ring, which she passed on to Sally, the writer of the piece. There were also pieces about a music box, acquired many years ago on a childhood holiday to Sorrento; a journal from the 1930s, childhood games which included a glorious dressing up box, a chair passed on from a father, a dictionary which had belonged to a much-loved grandfather, and my own piece, about an old chocolate box which holds the letters and photos my father chose to save.

This week, we start from a picture. I'm very fond of doing this, as the group knows.

This picture is in the Tate collection, it's by Pierre Bonnard, and it shows a view from a window. I don't know where the view is of - somewhere on the south coast of France, perhaps? But I do know I'd love to be there right now. 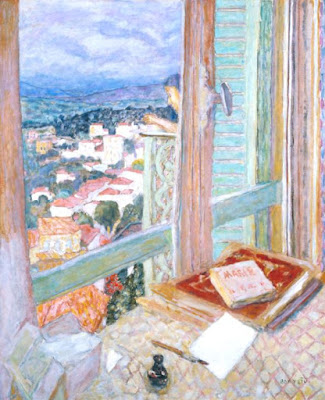 So to the task. Here are a few options:

Simply describe what you see in the picture, and if you like, take it on from there. Imagine it's your room: why are you there? What do you feel about being there? Does this place have some particular significance for you? Are you waiting for something to happen - perhaps to meet someone for some significant reason?

Describe the view from one of your own windows. Let your thoughts wander: is it a view you're fond of? What does it mean to you? How do you feel, looking at it now, in the time of the virus, in this extraordinary situation?

Think of another view from another window, a view that was important to you. Why was it important? Where were you? What was happening in your life at that time?

As immediately above - but make it all up!

Have fun! (And if you've just dropped in and decide to have a go, it would be lovely to hear from you in the comments.)

Email ThisBlogThis!Share to TwitterShare to FacebookShare to Pinterest
Labels: creative writing exercise, View from a window

Well, now, for obvious reasons, could be a good time to start! I write books for children - for more information about me and my work, click here. I also run a creative writing class in Cheddar. Usually, we meet on Thursday mornings, but because of the virus, that won't be possible for a while. So I'm going to give them an idea for a piece of writing here each week, and we'll be sharing the results at our usual meeting time on Thursdays.

So I thought, why not post the prompts, tasks, ideas, whatever you want to call them - on here, where they're accessible to everyone? I firmly believe that writing, like any creative activity, is good for you. You may not be able to leave your home, but that doesn't mean you can't send your imagination soaring.


A useful hunting ground for ideas is among your own memories and experiences. Many of the tasks will draw on these. Just have a go - it might be a few paragraphs, or a few lines, or it might be much longer. Do follow the blog so you'll be notified when a new post goes up - usually once a week, and do tell me in the comments how you're getting on. Hope to hear from you - and above all, I hope you enjoy it!

Here is the first task.

I don’t know if you’ve seen the TV programme The Repair Shop, which has just been moved to a prime-time slot on BBC 1 on Thursday evenings. Its setup is simple: members of the public bring in objects which are battered and broken, and the team of experts restore them with astonishing skill.

It's become very popular, and though some of this is undoubtedly because it’s fascinating to watch the skill with which the experts approach their task, I think a lot of it is because each object comes with a story. Often, it belonged to a much-loved parent of grandparent or child, and seeing it restored brings great comfort – and often a few tears – because the renewal of the object also brings about the renewal of the connection between the person and the object’s original owner.

So objects can mean a lot, and can tell us a lot about their owners. (Look at the picture above right, which shows boots painted by Van Gogh - can you picture the person who owned them, and imagine what their life might have been like...?)

Now - choose an object that belonged maybe to a parent, grandparent, partner or friend. Describe it carefully, and use to as a starting point to write about its previous owner, and perhaps to explore your own relationship with them. See where it goes!